This advertisement exemplified the counterintuitive campaign mounted by Porter Klein Waldham in 1954, designed to make Pall Mall cigarettes appeal to the rural American market. Martin Klein took on this account after a board meeting had initially rejected it as unfeasible. Senior partner Ephraim Porter expressed doubt that the ‘pompous, British image of Pall Mall clubs could ever catch on in America, the cradle of democracy’. 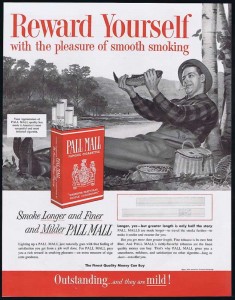 Klein mounted a campaign designed to appeal to the mid-western obsessions of tobacco, leisure and having sex with fish. He chose the image with care, repeatedly sending it back to artist George Woodward for alterations. A man relaxes with a post-coital cigarette after catching and enjoying his fish. Focus groups gave lukewarm to negative responses to this advertisement. Klein, however, trusted his intuition and had the print advertisement placed in the heartland of US men’s magazine territory – Playboy, Business Week and Hunting and Fishing.

Klein, we see in hindsight, had recognised the essential nature of having sex with a fish as individual, private. People in groups would need to consider their public perception, what other people in the vicinity thought of them. People tended to read the above magazines in private, with the ability to indulge their fantasies without interruption. His target market would be in a receptive frame of mind. They would make that golden association between the ecstasy of landing one’s fish and the smoking pleasure that could follow.

Porter Klein Waldham’s campaign increased sales of Pall Mall by 238% in the third quarter of 1954. It is justly recognised as a revolution in the application of Psychology to the business of advertising.