I am currently reading John Julius Norwich’s magnificent 3-volume history of Byzantium. The thing that stands out most to anyone who studies or lives in Turkish Thrace is the sheer number of times that disgruntled armies rampaged through it leaving ‘a nightmare trail of slaughter and destruction’ or warlords whose vengeance meant that ‘every living creature left unburnt was butchered’. For much of the latter part of Byzantine history, Thracian monasteries were not richly appointed repositories of precious objects. Those that survived outside garrisoned walls were carefully hidden and devoid of anything that might attract armed attention. 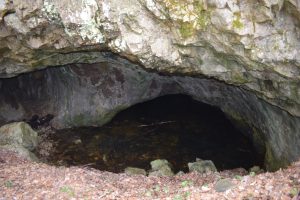 This monastery is about one hundred metres from the current border between Turkey and Bulgaria. It is well hidden, as the troubled history of that region would have demanded. It lies in a north-south valley (41°56’43.1″N 27°31’12.6″E) that is invisible until one is standing directly above it. This is about 1.3 km north-east of the village of Şükrüpaşa. 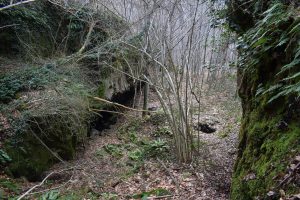 The valley from the south

The valley shelters a small natural cave system of the kind that the medieval monks of Thrace sought out to modify into their churches and monasteries. Presumably, most of the monks’ residences were structures built of wood and stone in the valley. There is little trace remaining of any of these. 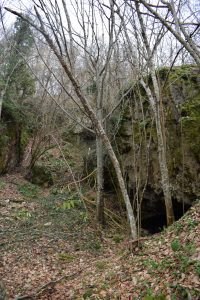 The main monastery church has been dug out of a cave in the east-facing wall of the southern side of the valley. The cave is about 15 metres wide and extends 7 metres into the rock at the point of the apse, unusually but of necessity pointing towards the west. The church is currently full of water. It may be possible to explore underwater in summer but I was there on February 1st, 2018. Five minutes of standing in there made me lose feeling in my legs for nearly an hour so I didn’t check much of the internal detail of the church. However, there are clearly niches in the wall of the apse; somewhat less developed versions of those in the south chapel at Asmakayalar [4]. 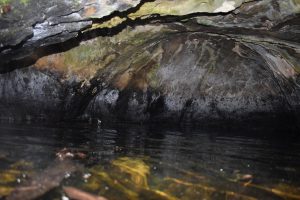 There is some evidence of carving in the rock wall above the cave entrance. Some of this seems to indicate that there may have been wooden beams attached here to support a roof. To the south of the nave extends a small chapel with no defined detail remaining. 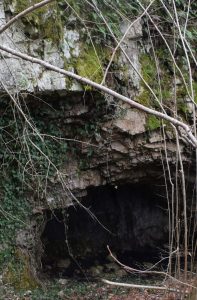 Carving (top) above the cave entrance 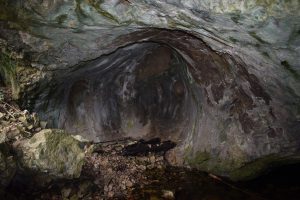 Chapel to the north of the main church

There are a few small tunnels carved into the rock in the uphill (northern) part of the rock face but nothing that indicates that it had any major part in the life of even such a small monastery such as this. 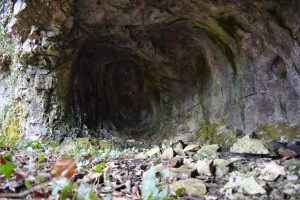 Passage carved into the northern end of the complex

It is difficult to estimate the construction date of the main church. The carving indicates that it is from a date later than the 6th century Monastery of St Nicholas in Kıyıköy. This one clearly comes from a more troubled time – perhaps the 10th century in the relative calm before the disaster at Manzikert. One presumes that the water table was lower when it was operating. No matter how hardy the outland Byzantine monks, surely even they could not worship with any real dedication in freezing water. 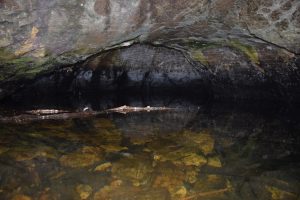 Water in the nave of the Şükrüpaşa church

Still, the remains of the monastery are more solid than any buildings in the nearby village of Şükrüpaşa. However, it does boast a nice version of the vernacular architecture of Thrace. The houses have a solid stone understorey with a wooden (often wattle and daub) upper floor. There is a great variety of balcony styles. 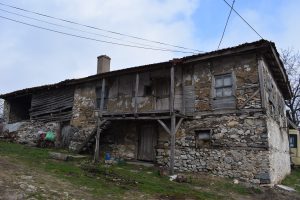 In addition, the area has a distinctive kind of A-frame barn. 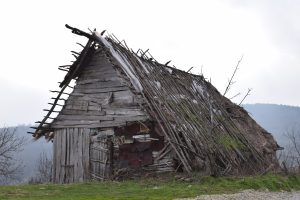 One of the barns characteristic of the border region