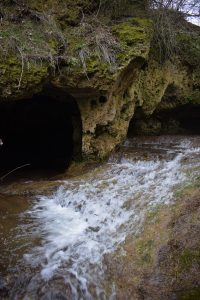 The waterfall runs past the church entrance

Maybe monks were tougher in the 6th century. I visited this monastic complex after the heavy snows of January 2018. The snowmelt had enlarged the rivers into torrents. The Ana Deresi, normally a quiet, well-behaved watercourse, swished past Kuzulu’s rock church in a whitewater curtain, filling the church and associated monastic cells with freezing water and shards of ice. 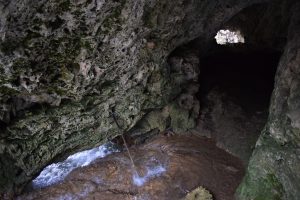 Water runs through the narthex and into the ayazma cave

In calmer times, the water babbles through a channel in the narthex of the church, then empties into a domed cavern that must have provided a lovely, cool reservoir for thirsty summer monks. This system breaks down in times of heavy rain and makes attending church a foot-numbing experience. 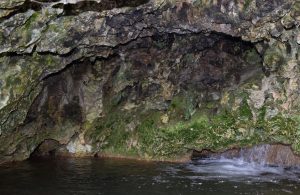 The ayazma cave with a clearly-defined Vader

The ayazma cave has a surprise on the wall –  millennium-old evidence of the dark side of the Force. A churlish man may talk about patterns of oxide deposition on limestone surfaces but for most of us, this is the site of the first Jedi temple in history. 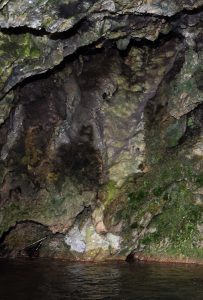 “It is your destiny…”

To get to the complex, one heads north from the village of Kuzulu (41.869790, 27.271031), a slightly dispiriting place in midwinter owing to the battening down of any leaky bits of building with blue plastic. The surrounding area is dotted with Neolithic tumuli which have endured spasmodic excavation/treasure hunting over the past centuries. 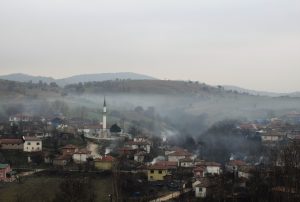 After rain, one is forced to ditch the car a few hundred metres along the northward road. One continues on foot through hilly farming territory, occasionally seeing traces of Byzantine stonework on the hillsides. These are much easier to see in winter when the foliage is gone. The clearest of them are on hilltops immediately north-east and south of the monastery. The former holds the remains of a Byzantine castle (41.900885, 27.281598) from the 3rd or 4th century. Clearly , this was a flourishing settlement in early Christian times. 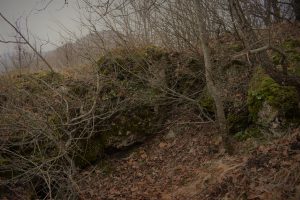 Remains of a Byzantine building to the south of the monastery

In a small, fertile valley amidst the hills, one finds a normally pleasant stream above which nestles a ridge of limestone. This contains a network of natural caves which has been enlarged and adorned to become the monastery complex (41.898462, 27.279970). The first few caves are small. There are traces of graves and of ledges that served as furniture. 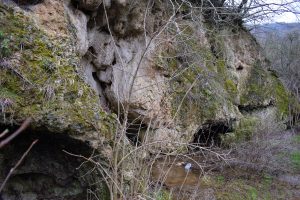 View of limestone ridge from the western approach 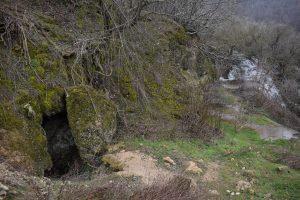 The first significant cave contains an entrance to a subterranean basement. This appears to have been a catacomb. Any human remains are long gone and it now serves as a home for bats. 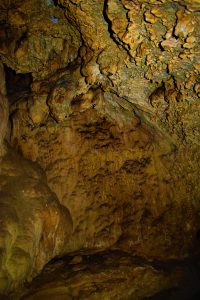 The catacomb is still an active limestone cave 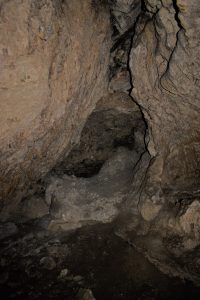 Tomb in the lower cave

Moving eastward, one finds a number of above-ground chambers. These appear to be natural with minimal stoneworking to render them suitable for habitation. The chambers have, however, been joined by a roughly carved passageway. 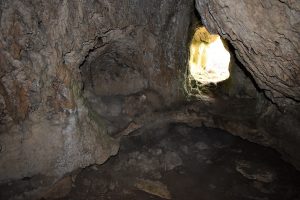 The effect of these is similar to the dwellings at İnceğiz [12], although that monastery is much larger. 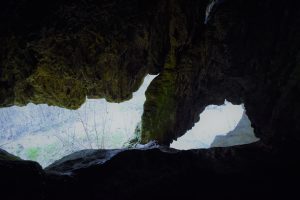 View from the windows of monastic cells

East of these chambers, the river is encountered in its full force. The church and ayazma are carved into the prow of the rock where the face is at its highest. 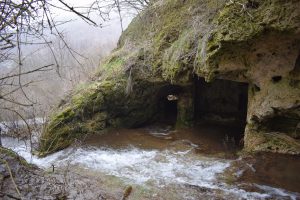 Entrance to ayazma (left) and church

There is evidence of a wooden structure once attached to the rock in this area. Clearly, there was a form of narthex covering the entrance shown in the previous photo. With the river in full flood, it is not difficult to see why none of the woodwork remains. It is probable that the course of the Ana Deresi has changed and that the level of the water table has risen significantly. Evidence for this is the water level in the nearby Şükrüpaşa [15] church, whose floor is permanently under 40 – 60cm of water. 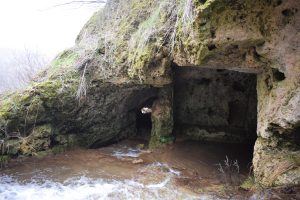 Whether the Darth Vader cave really served the purpose of a sacred spring is conjectural. It appears that the water has flowed for millennia through the location of the former narthex and down into the sheltered cavern. If this is the case, it must have been wonderfully refreshing for the monkish residents. It is probable that the summer population of the monastery was significantly higher than in winter. 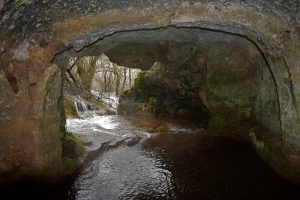 View from the apse of the Kuzulu church

The church is a classic, single-nave Thracian excavation of about 7m x 4m. It is aligned as close to east-west as the rock enabled and there is a strengthening belt of rock supporting the centre of the nave. 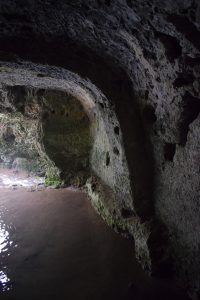 Reinforcing rib in the nave

The sanctuary is slightly raised, which put it above water level at the time of visiting. The apse is semicircular and has a number of features carved into it. 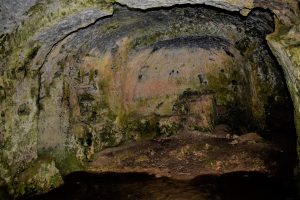 Apse showing altar, niches and a sort of abbreviated synthronon

The altar is in the centre with a raised dais for the priest. The walls above the altar show evidence of the attachment of sacred objects. There is an unusual multi-stepped throne to the left of the altar. This may have been for the seating of dignitaries during services. 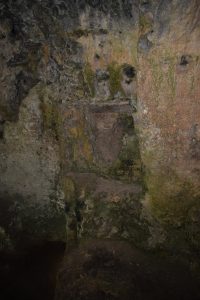 This view of the structure described above shows different detail. Perhaps this was the area for preparation of the sacrament – what would be the prothesis in later Byzantine churches. Clearly, there was a good deal of paraphernalia on the walls around the structure. 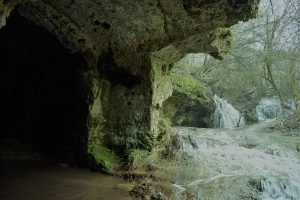 View from narthex to Ana Deresi

The picture above shows the view from the narthex toward the waterfall to the east. There is plenty in the rock wall to hint at a substantial structure attached to the church at this point. This part of the river may be an overflow from the main channel, only having a significant flow in times of flood and snowmelt. Most of the time, this monastery was probably a pleasant place to live with reliable water supply and storage. Not normally inside a waterfall.