In the 2000s, there was a brief craze of unhygienic places having footbaths of water in which you could put your reeking feet in order to have fish nibble at them. This seemed to me like 1. fish abuse, and 2. a good way to catch foot diseases. 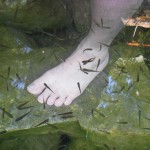 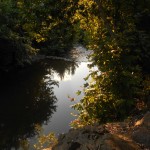 When I went to the beautiful Kazdağı National Park in the mountains above the Aegean coast of Turkey, I found that the fish were willing to do this pedicure treatment in the wild. Normally, fish scatter and disappear when you swim in their river. However, just dipping your feet in the river in the picture above would bring a swarm of tiny fish to you. They would chew on your feet if they could get to them. They would also nibble at any part that you put in. A bit off-putting at first, but they never seemed to get hurt by limbs flailing about when I was swimming. Eventually, I just got used to being surrounded by a cloud of orally familiar fish.

There is a place near Sivas in Turkey that claims to use temperature-resistant fish for treating psoriasis [3]. Go for it.

Now, the crabs. The east coast of Yorke Peninsula in South Australia has crystal waters and a high tidal range. If you go for a walk on Sultana Point near Edithburgh at low tide, there is a fascinating array of marine life to see. My 2-year-old daughter and I were eating razorfish (Pinna bicolor). This necessitated cracking open sharp shells and doing a lot of cleaning of stuff inside. After a bit of work, we would get an edible morsel that she would eagerly chew before demanding more. The detritus would attract all sorts of animals, including some small mud crabs. 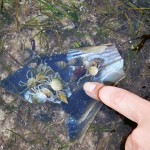 When the supply of razorfish guts ran out, the crabs would nibble our feet. They were quite insistent with some bits of loose skin but never went as far as causing pain. I don’t know whether the concept of crab pedicures would take off like the fish ones did. There’s a business idea for you.

I suppose these foot-loving creatures would correctly be called pedophiles. Not paedophiles.