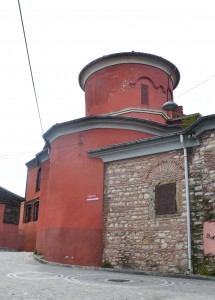 This is a fortress of a place, probably necessary for it to have survived relatively intact as a working church from Byzantine times to today. It is the only one to have done so. On its wall, it has a copy of the decree of Sultan Mehmet II, conferring the right to retain the building as a church. The original is presumably safe in a vault somewhere. The Mouchliotissa used to be a regular shape with a dome supported by four cupolas, the same sort of plan as the major mosques. However, the depredations of time, fire and town planning have removed parts of it and added others. The church of the Blessed Virgin Kamariotissa on Heybeliada is of a similar design but has been protected by its island position and by nestling within the protective walls of the Turkish Naval School (formerly the Greek Commercial School).

The decoration inside is unlike that of any other church in Istanbul. The caretaker says that the iconostasis is unchanged from Byzantine times. The aged paintings, especially those in the top row of the iconostasis, repay close examination. The symbolism seems deeper than anywhere else. One mosaic icon and some paintings are probably original, from Byzantine times. There is an underground passage that is said to lead to Aya Sofya. but if all the rumours of tunnels to Aya Sofya were true, Constantinople must have had a superb Metro system. 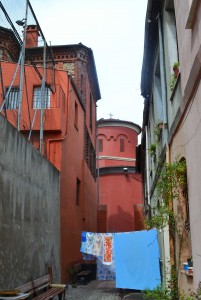 The Church was allegedly founded in the late 13th century by an illegitimate daughter of Michael VIII Palaeologos who had been packed off to the east to hold off a rampaging Mongol warlord by marrying him. However it seems to have been in existence since 1261, well before her return from the bliss of conjugal diplomacy. Apparently, her experiences were sufficient to cause her to renounce worldly pleasures and she remained in the church convent until she died. At the moment, the church is painted an uncompromising red to match its Turkish name of Kanlı Kilise (Bloody Church). The fighting at The Conquest or The Fall (depending on your point of view) released a lot of blood at this point in 1453. 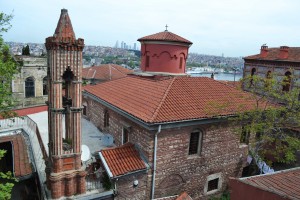 If you want to find this church, be aware that Google Maps has placed it on the site of the big Greek school that is nearby. These coordinates (41°01′47″N 28°56′56″E/41.029722°N 28.948889°E [4]) are correct. The church has services at irregular intervals, the irregularity increasing in the summer months. The Name Day for both Mary and Theotokis is August 15th. This may be your best chance to see a Byzantine church in action. The following pictures were taken on that day in 2014. 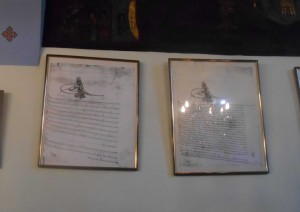 The Fırmans of Mehmet II and Beyazit II 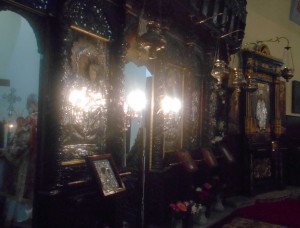 Iconostasis with priest and icons 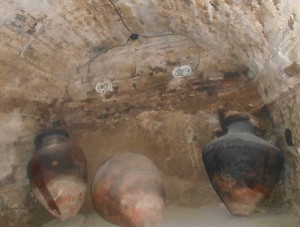 Jars for offerings in the crypt 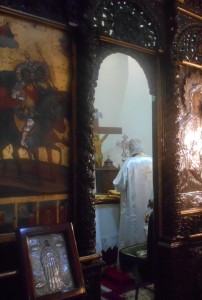 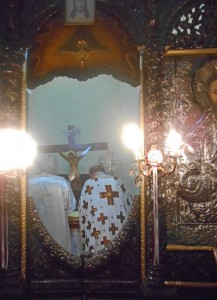 Priests behind the iconostasis. 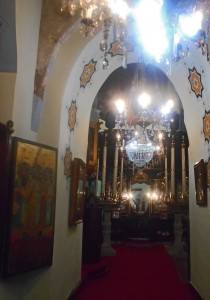 View through the nave to the sanctuary at the eastern end of the nave. 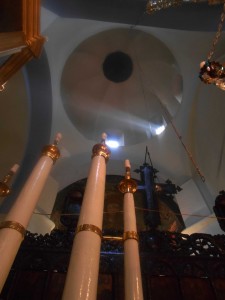 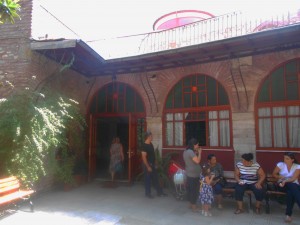 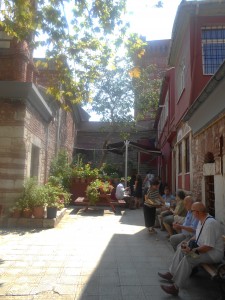 Courtyard of the Church of Theotokos Panaghiotissa 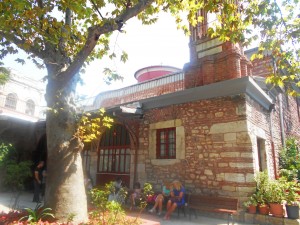 A thriving Greek community after centuries of interesting times. 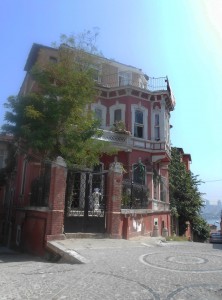 This house is twenty metres downhill from The Mouchliotissa. 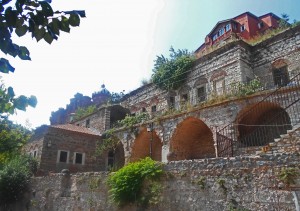 The house of Dimitrie Cantemir, onetime saviour of the Church of Theotokos Panaghiotissa. 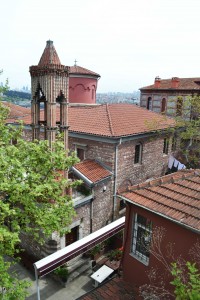 There is some interesting ruined vaulting on the uphill side. Local children may cheer you on (as they did me) as you clamber on it to gain an aerial view of this most resilient of churches. 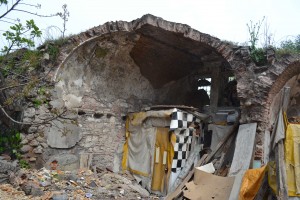 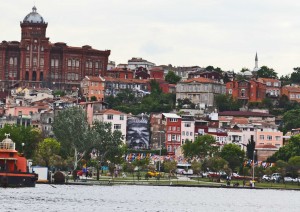 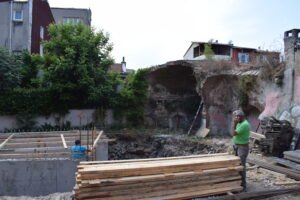 July 2019. Building work has made the arches on the south side of the church inaccessible