This was in the Kaçkar Mountains. One of the blokes I was climbing with was a mad Israeli who took every opportunity to leap off, dangle from or squeeze into anything that shouldn’t have been touched. 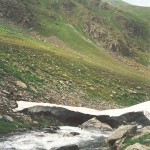 We saw this. Ilan dug his elbow into my ribs and said ‘Come on’. We plunged into the stream and rock-hopped into darkness. 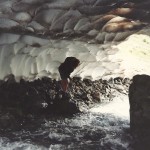 It looked like this inside the entrance. The ceiling was made up of packed snow which had consolidated into a frozen mass over the months of winter. It was now July and the ice was melting. It had dug this tunnel out of the ice and now the roof was melting. It showed this by occasionally dropping an ice boulder from overhead. This explained the strange structure of the roof of the cave.

We had torches so we went on until we couldn’t any more. When we walked back, ice boulders seemed to drop randomly around us. We got wet but not killed. We carried on up the valley, which ended up with a glacier nestling in a col near the summit.